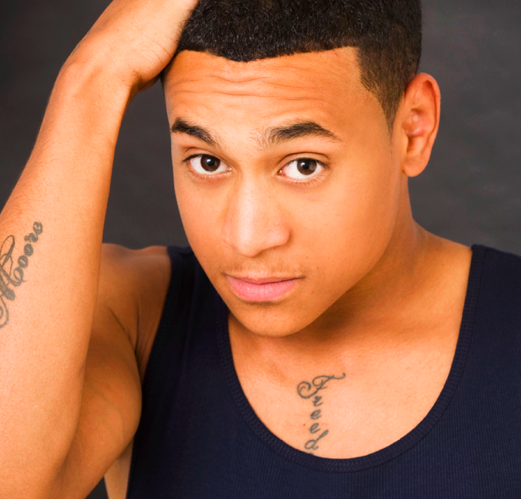 Brummie upcomer Curtis Moore talks to SB.TV about his new track Lipstick with Scorcher, his X Factor ordeal [instigated after teenage pictures of Moore posing with weaponry surfaced online] and the Northern star gives his opinions on England’s capital city…

Basically I’ve just been improving as an artist because when I went on the show I wasn’t ready. I’ve just been trying to find the diamond and polish it. I’ve been trying to get better as an artist and as a person because I was real young when I went on there. I’ve been working on loads of different material and I have a lot of songs put down that I haven’t done anything with.

Give us a bit of background on the track Lipstick, what was it like recording with Scorcher?

We went down to Essex for two days and we just jammed, we were bouncing ideas around in the studio, trying to find the right melody – you know how it is. When we finally got it we reached out to Scorcher and asked if he’d be happy to feature on the track – and luckily he liked what we were doing and thankfully he is a part of it. Working with him was a coming together of management, it just felt right and I think that we looked good together on camera.

So what’s the plan from here? Is there an album coming together?

We are kind of just chipping away at it and taking it step by step. I don’t wanna be rushed with my music, I don’t wanna be rushed at all. I think that the longer I take it with it, the better the songs. I want longevity – I don’t want to be here one minute and not here the next. I want to take my time and obviously work on the album or EP…and just build up my profile in general.

What I really wanted to know when I was researching you and the result of your X Factor appearance was how a 16-year old deals with being denounced by public figures, being called a “troublemaker” by various members of their own community, and being reduced to words like ‘Thug’ ‘Knife’ ‘Bad Boy’ by tabloid newspapers? – Which in many ways is cool on the streets – but I imagine you have a family…

It’s just like…[Pauses] it’s hard because my mum and everyone has seen [the pics] so it was hard but I think I’ve just got to keep it real.  For me, the bottom line was almost ‘This is what you’ve asked for’ and so you have to deal with it. [Pauses] You just have to recognise and be careful of what you are doing…all you can do is deal with it once you’ve done it.

I wouldn’t say I regret going on the show…but I kinda do – it’s got me to where I am now. I regret it for all the bad stuff that they wrote about me because I can tell you now all of it is untrue, some of it is true but you know how the press works. It’s all lies – the people that know me, really know me.

I’ve known a lot of teens who’ve posted similar content to what you did at some point in time, but they didn’t get their lifes picked apart like you did. So as your now working so hard to bag this career in the music industry, do you ever think twice about reaching for a goal that’s gonna put you right back into public scrutiny? You’re only twenty and stuff is still gonna happen…

If I make a mistake, in my town it’s in the papers or it’s being publicised.

Yeah that’s now and so I’ve kind of got used to it. I just want to spread a message out to people that crime and getting into trouble and running around with madness isn’t necessarily the way out. It’s the message that I want to send out with my music and let people know that you can turn something bad into something good – definitely. I’m not perfect and I still have misdemeanors…so I just take it step by step and be humble with everything I do. In my area – and in a lot of people’s areas a lot of the stupid things that you do, you do out of boredom. Most of the trouble I got into was out of boredom and then I’d end up going to prison for it or something stupid. It’s just about showing people an alternative.

Without staying to long on the X Factor and instead of me asking your opinion on the show, I’d like you comment on the following quote, “A show that has people like Cheryl Cole judging others on their vocal talents could never serve the music industry. Never.”

I think that’s wrong because she is a savvy business woman and that’s what it is, it’s a business – it’s not really about who has got the best voice. I haven’t got the best voice…so from a business point of view I think the quote is right, but it’s wrong. On the other hand it’s true, how can she sit there and say to somebody ‘you can’t sing’ because she can’t sing herself? But she is savvy and a good performer. You’ve got to have certain qualities to make it in this industry and it’s not about the artist at times, it’s about the team that you have behind you.

So what you listening to at the moment?

I’m listening to Chip, a bit of Marvin Gaye – I love a bit of Marin Gaye. I like Squeeks…I don’t really listen to a lot of others people’s music because when I’m trying to make my music I start picking up their traits. I get mind block when I listen to other artists and start singing like them, so I try to stay away but definitely Marvin Gaye at the moment.

Nice. Are you looking to get Squeeks and Chip on record at some point?

I really want to do something with Chip, who doesn’t? I can relate to him in so many different ways, I think it would only be right that we did something. With Squeeks man…I wouldn’t say no to working with Squeeks.

It’s always interesting to ask someone from outside London, about London. So what are your impressions of the city? What do you like or hate? Any notable differences or similarities? – Are you based here now?

I’ve been here a lot, but I’m not based here. My plan is to move here, that is the plan. [Pauses] I think everybody here is in a rush and no one has any manners…no one’s got any manners at all. In Birmingham if you drop something someone will pick it up for you, in London no one will do that. It’s like New York or something, people don’t pay any mind to each other and I really don’t like that – I just think it’s rude. Also, I do like London but it’s not a good idea to drive anywhere is it?

A lot of the artists I interview will say that that their favourite places to gig are up north locations because crowds are too reserved in the capital in particular. Tell the readers a little bit about the Birmingham music scene…

I’d say that a Birmingham crowd is a lot harder to please than a London crowd. Very much harder, especially if there are real singers the crowd and you’re singing. I think the scene in Birmingham is underrated and it p****s me off really bad. London is the capital, it’s the platform, it’s on the media channels, everywhere you look it’s London London London London! No disrespect to Londoners; but the scene is getting crowded with London rappers, London actors so…I think people should give others more of a chance. Hopefully the more artists that come from the Midlands or outside London gives us more of a chance. I think it’s about breaking the accent barrier, I think that’s the main thing. Hopefully I can be someone who can say ‘I’m from Birmingham, I’m him, this is me, this is my music, fuck you I’m from Birmingham.’

Are there any artists from up North that Southerners should be looking out for?

Stardom is the first person I will say, watch out for him because he is coming with some big moves. [Pauses] I can’t big myself up can I?

You got to watch out for me because I am coming with some power moves and the power moves are doing what they are supposed to be doing.

There’s another artist called Luke Truth who is actually a good friend of mine believe it or not and he is just an amazing singer who everyone should just check out.  He sings soul but not like most singers, most singers sing in an American style but he sings with his accent and it’s just so original…definitely check those guys out.

So after all these years is there anything you want to say to Mr. New Daddy Simon Cowell? Or to the members of his team who must surely prowl our site?

I’m just grateful for the feedback that he gave me, I know he gives everyone feedback and the feedback he gives is probably scripted or bullshit. But I do thank him because in a sense his words alone have got me to where I am now. He did say I was the most current act at the time, obviously that was four years ago but I don’t feel as if I’ve fell off or gone behind.

The only thing that I think leaves me at a disadvantage is the fact I’ve been on the X Factor and a lot of people in the industry hate it, they hate it – even radio – as soon as they know you’ve been on X Factor they won’t play you. But a big thanks to Simon…I will be seeing him, I will be seeing him definitely.

Lipstick is released on 28th August.